To source, or not to source...

Source control is a must for any development team.  It allows a complete history of changes, so you can revert back to any given change set at any time, as well as providing a backup.  If you use a local server to store your repository, then as long as you have sufficient backup policies in force, you should be able to carry on as normal in the event of a disaster scenario.

It also allows collaboration with other developers on the same source code, and subsequent merging of files updated by 2 or more people.

For the lone developer (most indie devs out there, I imagine) source control might seem over the top.  However, I use it mainly as means of backing up my source code.  I used to use subversion and backup to a local server.   Which meant I always had to have my dev computer, and a server running at the same time.  This isn't a major issue, but my server was an older PC that could die at any moment. If I was broken into, it could be stolen, or dmaged in some other way and then I would be in trouble!

Enter the cloud based repository solutions!!

I then started to use Microsoft's TFS online as it was cloud based and allowed me to utilise TFS from within Visual studio, which was very handy.  A lot of my dev was .NET based so I use VS a lot.  For my unity projects though I needed a better alternative as Visual Studio is RAM intensive, at least on my PC.

I recently discovered Source Tree which is a GIT client, and this allows you to store your repositories in the cloud at sites such as Github and Bitbucket.

The beauty of SourceTree is that it has a very low footprint in terms of RAM compared to visual studio; it is a GIT client which means I can commit any changes in an instant ( all commits occur on the local repository, and then push to the cloud at my leisure.  My only concern with GIT is that what happens if you have  a number of commits that haven't been pushed to the cloud, and you PC or mac dies??!!!

In any event I always tend to commit and then push, as my source control is used mainly as a backup.  Therefore, cloud backup means I don't have to worry about loosing my PC  as I can easily be up and running again by buying a new computer.

So in conclusion, with all the free implementation of some kind of source control ( Bitbucket and TFS are free) there is no good reason not to source control you software, in my opinion!

Unity 3d makes life so much easier if you want to target multiple platforms. My first game, Cannon Shot, is now on Google Play and Window Phone 8 store.

I am now in the process of porting it to Unity Web Player so I can embed the game in my website. For free games I will embed them and use Google AdSense to display ads to hopefully still gain some revenue.

Cannon Shot needs a few updates as well as porting to web player, but I get some mad errors when I switch to Android Platform.  I think it is due to some WP8 Code that I haven't #if'd out. But can't find it yet.

Aiming to release to IOS in early August too!

My second game, based on a unity starter project, is almost complete, just need to add some audio, create all the menu, and App Store art work.

Aiming for an early august release for Android, WP8, Web Player, and IOS.

Well my production schedule is growing rapidly as I come up with more game ideas.  I plan to have five smaller games out by the end of the year, and then begin a larger title that should out by the end of 2015...

Stay tuned for the next release... :)

JLabs Game Studios
Posted by Lee Allan at 00:53 No comments:

A provisional launch date has been set:

Our first title, Cannon shot, is a simple, free game where the aim is to fire a cannon ball over a wall to hit a target.  You build up the power of your shot, aim the cannon, adjust your aim based on the wind speed and direction, and then FIRE that cannon!

You score based on which target you hit, and add to this score a height bonus. If you hit the target, you get another go, and you increase your score.  If you miss, your score resets to zero.

A number free games include Facebook integration to allow interaction with friends to make a game a fun social experience.  This game follows that trend: You can login to Facebook and invite your friends to play, as well as posting your high score when you beat your current one, and also your score for each go if you achieve a particularly high score for a single go, and you want to let your friends know about it :)

High Scores
In addition, there is a global high score chart viewable in game, and also at the official game page which is reachable from the high score screen within the game itself :) Cool or what!?  You can try to become the world number 1 at Cannon Shot! :)

So wait in anticipation of the launch date :)
Posted by Lee Allan at 15:51 No comments:

No doubt some of you will be trying to integrate the Unity Facebook SDK into your unity projects that you wish to deploy to Android devices.

If you followed the facebook docs guides, you probably have it working in the Unity3D editor.  You can Login, and make API calls etc..

Problem
This post covers the problem when you deploy to Android, and the Login doesn't appear to work.  You may have received the following error:  "Invalid android_key parameter, The key 'hjd7hf...' does not match any allowed key . Configure your app key hashes at..."

The reason for this error is that your APK is signed with the debug hash key in unity.

NB. This post assumes you have installed the JDK, and ADT required to build android apps, and therefore, android games for unity.

disclaimer: I tried this a few times to figure it out so the steps below may not be optimal

Follow the below steps and you will be able to Login to Facebook within your Android deployed Unity game:

4) Now, under the heading 'Key', click on the Alias drop down, and click 'Create a new key', and fill in all the fields you need. The password should be 'android'

7) Now build your project again. The build should now be signed with the correct hash key.

8) In order to view your hash key, start a command prompt and run the following (replacing YOUR USER ACCOUNT):

10) If you deploy to an android device, this should now work :)

Please let me know if you encounter any further problems, or if my instructions are incorrect at any step

Life of an Indie Game developer

For indie game devs starting out, there is a lot to do.  Particularly if you have no budget and no colleagues.  If, like me, you are creating your first game in your spare time in between going to work full time, and the busyness of family life, time and money aren't readily at your disposal.

This brings about 2 realities that you have to accept:
1) You are responsible for every aspect of development:
2) You will not create an angry birds, or clash of clans on your first attempt, and expect to see a release this side of the year 3000! ;)

1 - Master (or attempter)  of all trades

This includes design, creating art work whether 2D or 3D, If 3D, this will involve modelling, texturing, animating; programming, marketing and the list goes on.

If like me you love each stage of the process, then chances are you will persevere and see the result of your labour.  It may get tiresome with all there is to do but the end result will be worth it if you don't let your standards slip.

In view of the realistic amount of time you have to devote to your first project, choosing a simple game will enable you to produce something within realistic time frames.  A simple game can be fun and addictive, and grow your name as a developer.

My aim is to produce a few smaller games, watch as the revenue comes in, and create larger games as the funds and opportunity affords.

The first game: Save The Mouse

The first idea for this game was simple, yet the ideas grew and grew so it became more difficult to produce quickly.  I simplified the gameplay, and created a slightly different game, with the aim of it being simple and quick to produce, whilst still being fun and engaging.  the new idea is still growing so there are already numerous updates planned after the initial release.

This will probably be a series of games, with our hero, the mouse, getting into all kinds of scrapes he needs to be saved from.

Well, time to get back to my coding!

The first game, save the mouse, is becoming a little larger than I intended as I keep getting more and more ideas ( lots of small features that all add up!)

So, I will now be utilising some of the design already finished, and creating a really simple game (at this point it's really simple, that could change!)  that I can knock together relatively quickly so I can get something out there and develop more of a following.

More details will follow soon so stay tuned... :)
Posted by Lee Allan at 11:21 No comments:

Well I have been working for a while now on my first game, 'Save The Mouse', a simple game with a cartoon look and feel.  I have a few images to show you that will be making their way into the game in some form.

I use blender as my 3D modelling, animation and rendering application,  gimp for texture editing, and unity3d (free verison) for putting the game together for multiple formats.  I like open source software as I am not a fan of piracy.

Characters
The game will consist of 2 characters, a crocodile and a mouse. ( You can guess where this is going ;) ) The theme for the character design fits with the cartoon style of the game, and are toy-like cartoon characters. The crocodile has been built in blender and here is a basic render using cycles render: 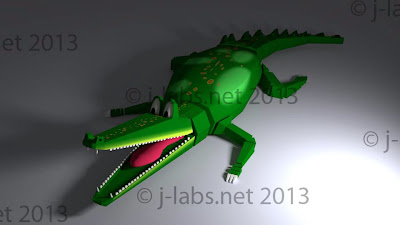 The game screen is still in the design phase but my first idea was a marble backdrop upon which the game will take place: 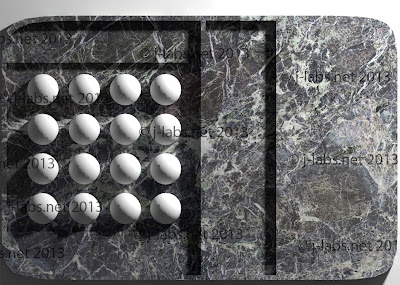 The buttons on the left will be replaced be coloured lights or some relevant image.  This looks kind of cool, but I'm not yet sure if it's right for the game.

I wanted the game to take place in a cartoon riverbank scene, as this is where the crocodile lives.  Here is a render of the basic scene ( I will add more detail as I feel appropriate).  This may replace, or be combined with the marble backdrop: 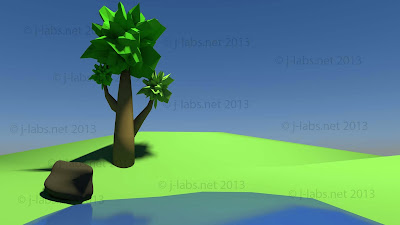 The design is taking a while but I want it to look as good as possible as the gameplay will be very simple for my first outing.

Any comments or questions please get in touch at j-labs.net and follow me for further updates.  If you like what you see, please tell your friends :)